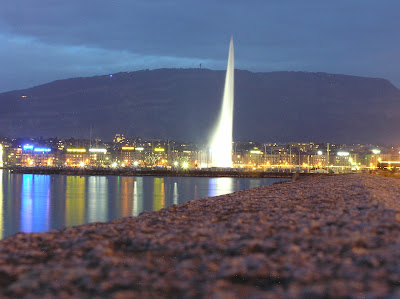 On Saturday, I visited the worlds 2nd most expensive city, found out how to park your car at underneath the bottom of a lake, and saw the the worlds most powerful water jet attraction.

On Saturday Morning I decided to have a long relaxing bath, and started to gather my stuff together.
My dad burst into the room washing his teeth with one hand, straightening his hair with the other, telling me he got an emergency call from work, and we are giving him a lift to Geneva. 10 minutes later we were on the motorway.

"It will be a short half an hour job", my dad said.
In the following five hours we had to explore Geneva, we saw some pretty awesome things.

Once we dropped off dad at work, me and my mum spent the next hour listening to the GPS saying 'Recalculating' and finding a decent car park.

I've never seen a car park with such a dramatic entrance. One minute the lake was in front of us, and the and the next thing we were heading down a steep road under it.
Your first impression of this car park is over-whelming.

There's a very long road going far down below, with small exits branching off to the car parks different levels. I was quite surprised later to find out there was only three floors.

There were digital signs everywhere showing you exactly how many available spaces there are. Above each parking space there was a small red or green indicator to make it easy to find a empty space.

Everything was shiny and polished and clean, and security guards patrolled the area on a little two wheel vehicle called a Segway.
It was just amazing to think that the Geneva lake, the biggest freshwater lake in Europe, was above us.

The second attraction we saw was possible the worlds most powerful jet.
One of the most famous things in Geneva is the Jet d'Eau, one of the largest fountains in the world.

Facts:
500 litres a second are jetted into the air up to a height of 140 metres by two 500 kW pumps, giving a total output of over one Mega Watt. This is enough to power 1000 homes (1 Mega Watt hour can power 1000 homes for an hour). The water leaves the nozzle at a speed of 200 km/h. When in operation, at any given time there should be roughly 7,000 litres of water in the air.

Unsuspecting visitors to the fountain—which can be reached through a stone jetty from the bank of the lake—may be surprised to find themselves drenched after a slight change in wind direction.

An observation I made could suggest that the jet itself was creating a lot of wind, by shear power, and the mechanical move of 7,000 litres up into the air.
Where the water comes back down, I have estimated winds to have been created up to 30 mph.

Geneva's Jet d'eau was used as a safety valve for a hydraulic power network and could reach a height of about 30 metres.

According to many on-line sites, Geneva is classed as the worlds 2nd most expensive city, but this varies to where you look. I would say that on any website it's at least in the top 5's or top 10's.

The United Nations is a worldwide organisation with 193 countries as members.

The goals of the United Nations are: