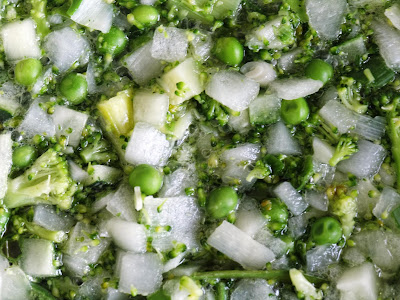 What's wrong with a man liking his old plates? I know! It's an old man thing, but I do like my old stuff,

And I also liked my nice white plates which we used in England. You could see what you were eating, the only exception would be if you would eat Fresh Snow which would be very unlikely to happen.

Simple, eh? White plates, colourful food. A man gets used to this.

Then they take you somewhere else, new place, and new fancy plates (just as well I hanged on to my old socks and fleece)

Today my mum said "Your dinner is on your table", but when I went to the kitchen, all I found on the table was a pale green blob. You could honestly not tell where the bowl stops, and where the soup starts, and there was also the strong possibility the cat ate it.

I was aware of the negotiations that my mum conducted with the cat yesterday, but I didn't know who won.

If there was any soup in the Green Bowl, it must have been Chameleon Soup, and it changed colour to match the bowl.

Then my mum threw some bread into the middle, and said "if I will mark an Epicenter, will you be able to work your way around it?"