There is a particle accelerator under my house! 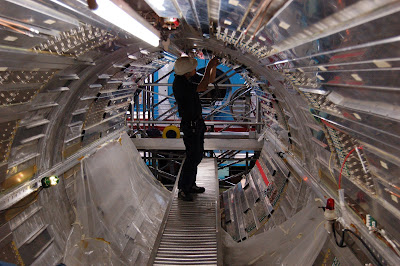 Or very close to being under my house.

That's what I think.
Some people think otherwise, and I respect that.
But for me, and any scientists reading this blog, science is fantastic.

I am starting a 3-part series on CERN Laboratories.

Why should you know about CERN?
Not many people know this, but CERN was one of the prime founders of the World Wide Web.
Yep. CERN created the Internet.

I'm sure you have all heard of a Particle Accelerator.
Before I learnt about CERN, I thought a particle accelerator is just used so you can make things go really fast.
It's not.
It's absolutely fascinating. They accelerate protons in a big loop, in opposite directions, and then smash them into each other! Millions of times a second! And those tiny very colourful explosions can tell them about dark matter, the Higgs Boson, they might even understand gravity! All thanks to those tiny little protons whizzing around.

I highly recommend that you do a bit of research on the Large Hadron Collider (LHC) in CERN Labs. If reading is not your thing, watch a YouTube video! Have fun!