The Blog of Survival Part 2 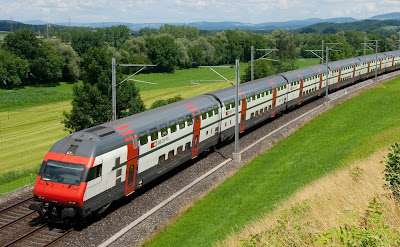 If you want something really badly, and you know your parents will say no, give it time, and they will come to you and ask you for a favour. The favour will be your deepest wish.

I knew that my new French school will be a bother, and the early mornings and late finishing of this school will give me nightmares for life.
I noticed that from our village goes a train to Nyon. This is the supper duper top-of-the-world-and-universe train running from Geneva to Lausanne, and further to Zürich.

It became my ultimate dream and ambition to obtain permission from my parents to travel to school by train.
The twice a day journey would in my mind compensate for the suffering in between.
My parents said NO both at the same time (my parents often say the same thing at the same time, and it's usually NO)

It's important at this point not to start begging, winging, or pressing the matter. At this point you keep your cool.
Think. Your parents will get busy very soon, they will start running out of time, they will need to be in two places at the same time, or something else unexpected happens.

This is your chance.

Put your innocent face on.

Say "I can go by train, it's not a problem"
Play it cool  as if it was something everybody else does, always did, and always will do, and it's not a big deal at all if you do it too.
As you can see it's very simple, but it requires a carefully planned strategy.

My dad was at work today and my mum needed to be at the airport when my school finished.

Today was the day when I finally travelled by a Swiss train all by my own.

It was awesome. I give the Swiss Transit System five stars ★★★★★

I walked from school to the station nearby, and waited for my train. Digital signs, accompanied by announcements made it very easy to track your train.
Arriving exactly on time I boarded the train, forgetting to swipe my ticket somewhere. I was only going one stop, so I stayed near the doors.

After departing the station, the train achieved a higher speed than I thought possible. Comparing the speed we were moving to the speed we travel on the motorway, I would say that for five minutes we travelled at 120 km/h (74.5 mph).

We pulled in to the station according to my mother 1 minute late.

For those of you asking about my school, I promise to write about school very soon. Off to do my homework!

Thank you for your loyalty, and I will write soon.